Honest Tea in Keurig K-Cups… the North American Tea Conference beings Tuesday… the fast-growing bottled water market in China… this month’s HerbalGram features the research of Dr. Selena Ahmed who is studying the impact of climate change on tea. 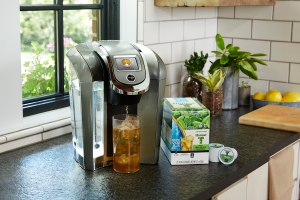 In 2013 Keurig-licensed teas generated 6.5% of sales in the bagged/loose tea category, according to Packaged Facts. Keurig partnerships with Snapple, Lipton, Bigelow, Celestial Seasonings, Harney & Sons, Twinings, Teavana, Tazo and Tetleys “are only now gaining traction in the marketplace, which will translate to even stronger sales in 2014: 10% of 2014 sales seems quite reasonable,” according to Packaged Facts: Tea and Ready-to-Drink Tea in the U.S.: Retail and Foodservice, 5th Edition.

Celestial Seasonings was early to the format, packaging a significant selection of its herbal blends for the Keurig machines. Bigelow Tea was another to enjoy first-mover advantage, locking in a contract with Hilton Hotels to put its tea in K-Cups in 89,000 hotel rooms equipped with K130 K-Cup brewers. Coffee selections vary throughout the U.S., guestrooms at Hilton Gardens Inns; for example, include Diedrichs regular and decaffeinated Coffee, in Canada Van Houtte’s or Timothy’s Rainforest Alliance Certified coffee but rooms in both the U.S. and Canada feature Bigelow Black Tea K-Cup packs.

Higgins & Burke is another early adopter but chose RealCups capsules instead of licensing through Keurig. Snapple (DrPepper) and Lipton, Twinings and Tetley and a growing number of smaller brands are packing tea in Keurig-compatible capsules.

Honest Tea sold 100 million bottles last year and more than 1 billion since its founding in 1998. It is the nation’s top-selling organic bottled tea. Count on boxes to crowd out other brands and carve some additional space from the coffee-centric selections at Bed, Bath & Beyond, Target and Walmart. Honest Tea will feature Just Green and Just Black organic, Fair Trade Certified tea to be brewed hot over ice and enjoyed unsweetened – the alternate and some say the antidote for carbonated sodas.

Honest Tea is the first Coca-Cola brand to appear in K-Cups since Coke purchased 16% of KMG. Look for FUZE Tea to follow when Keurig unveils its new cold brewer.

The magnificent horseshoe of cascading water is spectacular, driving spray as high as my perch 37 floors above Niagara Falls. The 5th North American Tea Conference, an annual gathering jointly sponsored by the Tea Association of the USA and the Tea Association of Canada (TAC), opens this week on the Canadian side of the border.

Canada’s Tea Association President Louise Roberge and her able staff have organized a number of interesting and timely sessions that I’ll report on this week.

Roberge chose the theme “SolidariTEA” for this year’s event which draws producers and manufacturers from around the globe. North America is now a top export destination for several countries as noted by Norman Kelly, with the International Tea Committee based in London. Rick Winslow with Nielsen Canada will present a state of the industry report on retail tea sales and Shimona Mehta of the NPD Group, Inc. will lead a discussion of key trends in the foodservice industry.

One session I’m sure to attend is Kevin Gascoyne’s pairings of tea and scotch. Gascoyne is a co-founder of Camellia Sinensis in Montreal.

This is the 60th Anniversary of the Tea Association of Canada, a milestone celebrated Wednesday at an award banquet where winners of the 3rd Gold Medal Tea Competition will be announced. The Tea Association of the USA hosted the last session in Bermuda where Peter Goggi was handed the baton as executive director.

In a country awash in tea bottled water is a refreshing alternative. Tea is safely consumed throughout the country when boiled but in many parts of rural China breaking the seal on a bottle of water is reassuring. China has developed a thirst for Western bottled waters. Boreal Catskill Mountain Spring reported a $24 million 36-month deal with SOHO Corp. for distribution of the Boreal Water Collection, premium water previously unavailable in China where it will be branded as Catsky.

A report from Transparency Market Research identifies China as the most active market worldwide for bottled water. The Asia Pacific region accounts for 33% of global demand with sales of $157.27 billion in 2013, according to TMR. The region, led by China, is expected to experience an estimated compound annual growth rate of 10.5% in revenue from 2014 to 2020 with sales of $279.65 billion by 2020.

The chemistry, taste, and health effects of tea can vary with changes in climate, says a new article published by the non-profit American Botanical Council (ABC). Recent research by Selena Ahmed, PhD, on climate change and its effects on the phytochemical compounds in tea (Camellia sinensis) is part of an extensive study conducted by Dr. Ahmed in the Yunnan province of southwestern China and has implications for the future of medicinal botanicals. Dr. Ahmed’s report on her ground-breaking research is the cover article for the current issue (#103) of HerbalGram, ABC’s peer-reviewed, quarterly scientific journal.*

Dr. Ahmed has worked in the Yunnan province for eight years, studying how weather pattern variations impact the naturally occurring phytochemicals and beneficial health properties of tea. Her forthcoming research will investigate how the effects of climate change could alter the benefits of other medicinal plants.

Chinese tea farmers have a finely attuned sense of how differing weather patterns affect the taste and quality of their crop: In the dry seasons, the tea leaves are more potent; in the wetter monsoon seasons, the leaves have a gentler taste and aroma. “The majority of tea farmers I have interviewed state that climate patterns have shifted noticeably over their lifetimes; such observed changes include warmer temperatures, greater unpredictability of weather such as increased variation of rains, and changing phenology of plants (i.e., the effect of weather patterns on plant growth cycles, including flowering and fruiting seasons, etc.), including earlier bud burst,” wrote Dr. Ahmed. The idea that weather patterns could noticeably change the taste, and thus the quality, of crops and influence the livelihoods of the farmers prompted her to analyze samples of tea from successive growing seasons to ascertain what differences are present on a chemical level.

“A vast body of scientific and medical research in the past several decades shows many strong correlations between tea, particularly green tea, and abundant health benefits” said HerbalGram Editor-in-Chief Mark Blumenthal. “Dr. Ahmed’s research has compelling implications not only for tea, but for other food and medicinal plant crops, for which changes in climate can cause alterations in taste, and, accordingly, the plants’ nutritional and medicinal values,” he said.

Dr. Ahmed writes about her tea research and connects the phenomenon in China with tea growers in other regions, including Sri Lanka, Hawaii, and Japan. In collaboration with researchers from Tufts University and the University of Florida, she studies the chemistry behind the shift in functional quality and secondary metabolites in the tea plant. Plants produce secondary metabolites as a defense mechanism in response to environmental stressors, and a high concentration of these metabolites often correlates to higher nutritional and therapeutic benefits for the consumer.

Through laboratory studies of extracts made from tea samples collected from the Chinese farms, Dr. Ahmed discovered that tea’s key health compounds (called catechins) can decrease by almost 50% when the leaves are harvested after the monsoon season as compared with leaves harvested after a drought. This is consistent with anecdotal observations concerning changes in tea flavor noted by the farmers she interviewed; the differences in flavor correspond with her analyses of the plants’ overall chemistry, including the catechins.

Source: HerbalGram is available at some bookstores and natural food stores and is mailed to members of ABC. Dr. Ahmed’s feature article is posted on the ABC website, accessible here.

Tea Biz posts are available to use in your company newsletter or website. Purchase reprint and distribution rights for single articles or commission original content.  Click here for details.

Unauthorized use and/or duplication of this content in any media without express and written permission from the author and/or owner is strictly prohibited. Excerpts and links may be used, provided that full and clear credit is given to Tea Biz blog.